Congrats to Daniel, a great artist who was here at the end of last year, on building a really cool site for himself on his own.

If you haven't seen any of Daniel's art before then you've got to check out his site. Beautiful stuff.

This is a video of one of his pieces from 2007 called "Luminalia," a serpentine line of fire floating upon the Tiber river’s surface in Rome, illuminating the length of the river with one thousand flames throughout the night and into the morning hours:

"The half-kilometer long serpent of fire celebrated the Tiber River, which is known also as the ‘blond serpent’. The serpent symbolizes Aesculapius, Roman god of medicine, whose mythological island home Isola Tiberina lies in the centre of the river site. One thousand candles lined each bank, while the serpent was formed from another thousand candles floated in the centre of the Tiber, taking life from the currents and carrying light into the darkness to prolong the longest day of the year."

Below is the cool drawing Daniel donated to La Muse before he left: 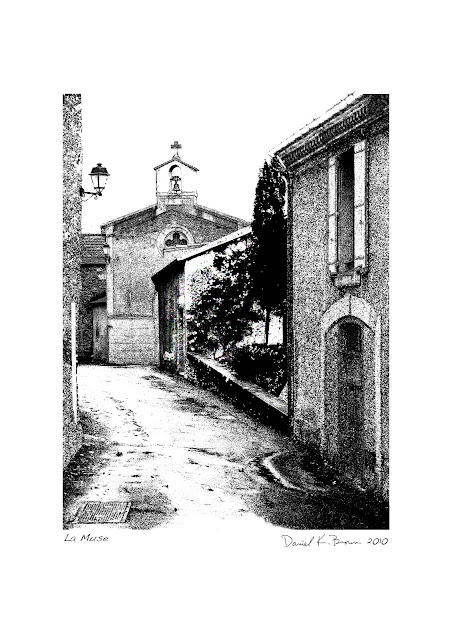 So beautiful! I am a big fan of time lapse videos.

What a fine drawing. Captures La Muse and the still atmo perfectly.

And refreshed happy memories of my stay there in 2009.

Hope to see the original work one day soon.

Located in the heart of Cathar Cassoulet country, in the midst of the National Walks system, the house is steps away from fresh water from a natural spring, wild mushrooms, walnuts and chestnuts in season, swimming at the lake in Pradelles, the Cubservies waterfall and the delightfully fun and eccentric Villeneuve Minervois Truffle Festival in December, January and February. You can also golf in Mazamet or Carcassonne, visit the UNESCO World Heritage Centre sites of Lastours and the fortified medieval citadel of La Cite, discover the Grotte de Limousis, Gouffre de Gabrespine and the many surrounding markets or go on wine tastings, climb at O2 Aventure beside the Lac de Cavayere beach, or simply sit and picnic by the Canal du Midi UNESCO World Heritage Centre or dine at the Michelin-starred Le Puits du Tresor down the road.